t would probably fall under Leon Kass’s critique of pathetic modern men maintaining their adolescences and even childhoods into early middle age, and even my best friend thinks it’s sad, an indictment, that I had so tied up my identity with my dog Maddie, who died 18 months ago today at the age of 8½. I think I have two schizophrenic senses of my soul, both of which, as I prepare to describe them, are patently daft, but they hold sway over me nonetheless. I suppose they can be summarized easily: that I am lucky and blessed; and that I am unlucky and cursed. Having Madlaine Barbra as my dog was by a wide margin my longest, richest, widest streak of feeling the former. Right now, emptied by her absence and through the pastures of ghastliness and sorrow at her passing, I can also newly feel genuine grace and gratitude to have been elevated by her.

Yes, she was a mangy mutt and stank, but she was also among the most beautiful dogs I’ve ever seen, and I’m pleased to report I was daily, if not minutely aware that I possessed a living superlative. I fear I will inevitably lose the imprint of the pattern of her personality, as memories sink unturned-over into oblivion. What a combination she was of cosmic calm and flightiness, of sighing ennui and jolliness. Dogs are maligned as being fawners and flatterers, but she was neither. Sure, she’d use her paw, eyebrows and voice to sway me if she wanted a treat, but she did not sham. She liked her distance and solitude, but also liked to stay connected. I loved how she’d gradually get as far away from things as possible, just to increase her own sense of personal space. Eventually, at my place at Even Sapir, she would sit at the bottom of the yard, sometimes joined by Jam, overlooking the entire valley below, and my guilt for cooping them up for hours every day back in Tel Aviv while I worked in an office 9–5 was replaced by even a touch of loving envy at her tranquility, that she could sit out there for hours, drinking in the quiet afternoon surroundings of the birds and the bees, whereas I could only join her there for a few minutes at a time before needing the stimulation of the internet once again back in the house. She didn’t follow me back in, trotting later into the house when she felt like it.

I can hear now the sudden quick lapping of the metal water bowl out on the porch as she’d refill quickly. Yes, it was her rhythms that I loved so much, so mercurial and so languid.

How I loved the stretching of the tie between us, maybe best illustrated by me rollerblading around the Tel Aviv streets while she ran alongside parallel on the pavement, and the glimpses we took of each other in the gaps between the parked cars. I knew at the time what a delight this was, but I was unable to fully appreciate just how rare and special it was. I would never have tried it in another city, certainly not here in Britain, where a big dog bounding unleashed along the pavement would certainly invite a busybody to call the police. This never happened in Tel Aviv and our rollerblading came to feel like a normal activity. I remember one evening in north Tel Aviv, me rolling noisily along, she bounding along silently, when a woman came out of an apartment block and said the word, “malach” — angel. Did she mean me? Maddie?

It was my greed, my dissatisfaction and desire for more, my desire to get out of Israel that led to the disaster that happened with her in Rome. I had a very bad and queasy feeling leaving Israel, but how to know when and whether to trust such feelings? I also had queasy feelings moving out to Even Sapir as well, and it turned out to be an altogether too brief golden age. 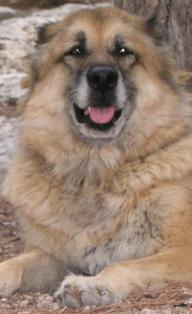 And so I am inevitably led to my other exaggerated view of my soul, that of the perennially sat upon. Things had become so warm and wonderful that it was bound to all come crashing down, and primarily because of me. One need not be a great king to have a fatal flaw that reverses one’s life, brings one from high to low. The power of tragedy is that it is not really about kings but about the plebeian soul in the audience who invariably ruins his own blessings by not appreciating them properly and fully while he has them, leading to his losing them (or merely losing them due to the simple passage of time).

When Maddie went I wailed at my fate: A double blow: what has been my main fount of joy will instead become my main haunting. And indeed, it has. Not only have I lost the delight of her presence, but I have acquired the sadness and wreckage of her absence. I look now at a photo of her and think that that is me, that without being alongside her there is no me, and yet she is no longer, so I cannot be alongside her anymore.

Indeed, we must unravel our identities from those who have passed, and I have often imagined a thick cluster of cables and wires slowly furling back into my belly. But to have any honor for ourselves we must also struggle against this unraveling of ties, else what were the ties really? Is grief then related to a sense of honor? We can forget and move on but we choose not to. It is a delicate balancing act, not losing yourself neither to lamentation nor to expediency.

I had forewarnings. Back in Jaffa on a walk an old geezer shouted down to me from his balcony, asking me about the dogs. He said they were lovely but he could never have any more dogs because it was just too terrible when they died. Barak and Noga, who had been Maddie and Jam’s dogsitters and second home, had lost their dog at six years old, and the ones they had when I knew them, though they were happy and tightly bonded, were not the first.

Maybe there is, as usual, more here, lovelinesses to tie together despite the horror. I have written and stared at the half sentence: “If I could love the world as I loved you, Maddie…” Almost all Maddie’s life was lived in Israel, so perhaps due to that, Israel will in time come to finally drown out other competing internal voices whispering in a gentle way, “home”.

So once again, my dear Maddie, goodbye.