On Fetching Jam from Italy

major climax in this sudden round of travels is reunification with Jam, here at Alessio’s place in the country somewhere in Tuscany outside the town of Cortona. She looks better than I remembered. As well as nice it’s also strange and melancholy. It’s been just over 10 months since I rushed panicking up the ramp at Ciampino Airport, leaving her temporarily in Italy a little distraught with Davide. Half that time, since May, she’s spent up here in the countryside. This place is more home to her than Tichborne St in Brighton is to me, and now I’ve suddenly waltzed back into her life and it’s going to be all change all over again for her. Here she sits on the balcony, facing the huge rolling hill vista while the last few degrees of orange fade behind one of the overlaps between a closer and more distant hill, while I stand facing away from the view, the laptop rested on a wooden cupboard of some kind. She’s now seven years old. It’s just the two of us now—her mother Maddie passed on two years and a month ago. But let not the end of the first paragraph of reuniting with Jam be about Maddie.

She looks melancholy, her head through the railings, staring out at the view, but it’s how she and Maddie used to sit at the edge of the yard at the house in Even Sapir, when I think they were at their happiest. Did they look less melancholy then? Maddie I think engrained this habit in her: sleeping outside taking in the view until 4am; none of the other dogs here join her in this. As she does so I wonder whether she feels lonesome for days of yore, to those days when she had her mother to do it with. I don’t think so. I don’t think they dwell in memories like we do. Though I do wonder. Davide says she was mopey for days if not weeks after I left before finally cheering up. Certainly during those times at least she was not dwelling solely in the here-and-now but feeling the loss. [Update 2016 Jan 25: And looking at pictures of her taken within the week of Maddie’s death, she looks and was, I realize now, devastated and traumatized.] And now? Just like us, she’s got memories of that loss as well. Perhaps the only difference is that once the healing has occurred, they don’t go back and reopen the wound repeatedly as we feel compelled to do. Or maybe some of them they do.

In retrospect, Maddie had a simpler life; the big adventures of uprooting only came in the last year of her life, whereas Jam has spent over a third of hers here in Italy, while her fixtures—first her mother Maddie and then I—fell away.

Jam and I lack the completely unquestionable bond that Maddie and I shared. That pains me, because I don’t think it will ever get that way. Her way of expressing affection is still as it was: an offering of alternate paws and some licks of the hand; there was no hugely expressed excitement at seeing me. Fair enough. But does that mean she’s reticent, unexpressive or complicated? [Update 2016 Jan 25: Forgetful! Healthy!] Certainly Maddie could express much more excitement in a greeting.

After the initial fifteen minutes in the kitchen and balcony we all went for a long hike. The views and the angles brought me back to those happy hikes around Even Sapir and Moshav Aminadav west of Jerusalem. I miss those times more than any (and since I had her and Maddie in other places that I don’t miss as much, then this perhaps should be a clue for us all: twist and turn, home for me should be a moshav somewhere west of Jerusalem).

Now that the sun has gone down and it’s actually a bit nippy (I do get a mild sense of dread when it gets dark in the countryside; I fear the boredom of the long evening and night), it reminds me of the hike we did in Turkey, which in turn reminds me of how much I’ve walked with this here dog. As I said, it does seem incomplete without Maddie, and that’s even without being able to quite imagine any more how it would feel with Maddie. Sadly enough she seems to be lost to me twice now: once in life and now in imagination: I cannot consistently conjure up nor remember the feeling of being with the two of them, Jam the tagalong partner.

Well, melancholy is okay; maudlin is not. Today was Shabbat, which is now over. But instead it somehow feels that Shabbat is coming in now, probably because I’ve been able to see the sun come down, and because last night I spent hanging around that grand institution, Cafe San Callisto, just waiting to get home. There are lovely people there and it’s fabulously humanist, but I would have rather been curled up in a nice bed continuing Andrew Weil’s Spontaneous Healing.

I’ve been looking forward to having Jam with me in the UK, walking with her of a morning in Brighton, then taking excursions with her to Shoreham and even London for walks. But right now all that feels very unevocative. Though as I write the words, it feels increasingly exciting. How lovely to have walked through St James’s Park and whatnot with Maddie; instead it will be Jam. I hope our connection deepens. I suspect however it will not. And that too is okay. My my, suddenly I’m with Jam again. 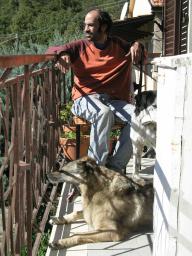